Congratulations to Madeline McNamara, who was awarded the Campion Accolade for Outstanding Performance at the Wellington Theatre Awards ceremony on 8 December 2019. Madeline received the award for her solo show, The Attitudes – Refusing Performance, which premiered at BATS Theatre earlier this year.

The Wellington Theatre Awards – Ngā Whakarākei O Whātaitai recognises the actors, designers, writers, composers and directors that create and produce theatre in Wellington. The ceremony began with a karanga led by Toni Huata and mihi by Adrian Tangaroa Wagner, and the awards were hosted by MC Stella Reid.

Madeline was unfortunately unwell so not able to collect her award in person. Here is her speech that Jo Randerson read out on Madeline’s behalf: “Thank you very much for this award I am honoured to receive it. I am sorry not to be here in person. I want to thank my dear friends and colleagues Jo Randerson and Jade Eriksen, both of whom have been so important in helping me realise this work. Jo helped me get the first iteration up on its feet which is always such a hurdle to surmount. And Jade has worked closely with me over the last few years to craft both the work itself as well as the process of working with audiences post show. Jade and I are continuing to collaborate on creating works of art which address white resistance to challenges about unearned white power and privilege, colonising behaviours, racism and the spectrum of white supremacist behaviour and thinking. I also want to acknowledge the inspiration of the of the Magdalena Project and Magdalena Aotearoa in helping me maintain an ongoing theatre practice.” 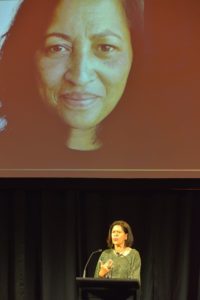 This year’s Mayoral Award for Significant Contribution to Theatre went posthumously to Nancy Brunning, acknowledging her achievements over her vast career in theatre. Tanea Heke, director of Toi Whakaari and long time friend of Nancy, offered the citation for this award and touchingly honoured Nancy’s work and person. Tanea Heke and Nancy Brunning set up Hapai Productions together in 2013 and this year Hapai Production’s Pakaru won a stunning number of awards- five out of their seven nominations; Jennifer Lal for Lighting Designer of the Year, Sean Coyle for Set Designer of the Year, Mitch Tawhi Thomas for New NZ Play of the Year, Excellence Award for Ensemble and won the Jack Jeffs Charitable Trust Production of the Year. 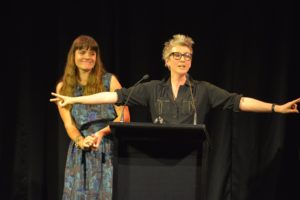 Congratulations also to Jo Randerson and Barbarian Productions, who took away Director of the Year and Most Original Production respectively for Captain Cook Thinks Again.

A full list of the winners can be found here.