The 2008 Magdalena Aotearoa National Gathering took place from Thursday 20 to Tuesday 25 March at the Newtown Community Centre in Wellington.

Building on the tremendous energy and goodwill that manifested at the 2007 Gathering, the 2008 Gathering had the theme of “exchange” and featured a blackboard programme. Rather than a pre-planned programme of paid tutors and presenters – which we did not have the resources for this time – participants were invited to contribute to a flexible programme based on what we could each offer and what we each wanted to get out of the Gathering. 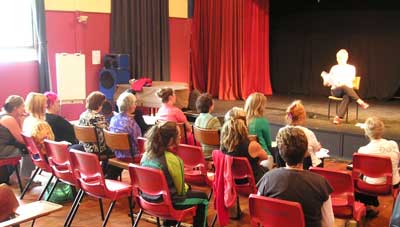 Above, Jan Bolwell reads excerpts from her current work-in-progress,
a play about the painter Frances Hodgkins.

All participants paid a flat fee of $70 (or $50 if they paid before 29 Feb) for all events during the entire five days and luscious lunches and morning and afternoon teas organised by our very own kitchen queen, Moira Aberdeen. There was a daily fee of $20 for those unable to attend the whole Gathering.

A Gathering was also held by Magdalenas in Brisbane, Australia, at the same time and a blog was set up for the two Gatherings to contribute to: http://magdalenagathering.blogspot.com/

Photos from the Gathering 2008: Exchange.